Welcome back again to the world of radio websites, as we take you on another tour of the wild, the wonderful and sometimes the plain simple but useful.

North American amble
Peter Jernakoff has built a website dedicated to his hobby of Medium wave DXing, which he describes as a “repository of DX recordings, logs, photos and links aimed primarily at the avid medium wave DXer. The recordings were obtained from my home in Wilmington, Delaware (USA). Give a listen, look around and enjoy yourself!” It’s a nice site with plenty of features, whether you want to browser through logs, help with some unidentified catches or check the QSL collection. Say hello too to Anna the Seal Point Siamese cat warming herself on Peter’s Drake R8B: http://www.21centimeter.com/

The links page will divert you down other enjoyable paths too. I was soon whiling away time at the home of the North American Time and Frequency stations WWV, WWVH, WWVB and CHU: http://www.geocities.com/radiojunkie3/

I was also just a click away from Canadian radio archive air-checks at: http://rockradioscrapbook.ca/ There are over 550 audio clips of stations and jingles from 1955 to the present, many with an accompanying report and photos. It’s difficult to stop yourself from clicking on ‘just one more’ and suddenly an unproductive, but very enjoyable, hour has passed.

Reader Mike Dawson M1ELK recommends the iWebRadio.com website, which advertises itself as ‘Radio...for Humans’. It is hosted at http://www.t35.com/~madchatt/HomePage/index.php This is a micro web broadcasting outfit consisting of both amateur and professional DJs producing their own programmes and broadcasting live on the internet. Programmes are then made available as podcasts. Listeners can join in the live shows with the DJs in the iwebradio chat room via the website. On Sunday afternoons you can hear Mountain View Radio with Jen the Radgirl followed by Aussie Tim then FM with DJ Vu. The station plays a lot of rare US rock and pop music plus a lot of international flavours.
If you fancy some Old Time Radio delivered in a new time technology, try the podcast at: http://www.otrpodcast.com/ It has American episodes from the 1950s of the Saint and Sherlock Holmes and CBS Radio Workshop, amongst others. For some Science Fiction Old Time Radio podcasts try: http://otrscifi.btpodshow.com/ “From its earliest time, radio has always been interested in Science Fiction. There has been science fiction on the radio since before Buck Rogers in 1932. Radio SciFi characters leaped into your living room as the listener would be taken on an adventure into time and space each week. Join us each week as we explore the unknown universe of science fiction only on the Old Time Radio Network.”


Ring out the old and ring in the new

ORF 1 / Radio Austria International still broadcasts in English, daily with ‘Report From Austria’ and the weekly ‘Insight Central Europe’ collaborative broadcast. Details and an online reception report form are at their website: http://oe1.orf.at/service/international
Many podcasts are also available, mostly in German but also French and English: http://oe1.orf.at/podcast/

BBC World Service Director of News Helen Boaden looks back over 75 years in one minute clips. Just click on a decade to read about and hear gems of BBC WS and of history itself: www.bbc.co.uk/worldservice/specials/1122_75_years/index.shtml
There is a My Space BBC World Service fansite at: www.myspace.com/bbcworldservice There are regularly updated blogs describing the past and present of the station, a gallery of photos of Bush House, QSL cards and past presenters, and the promise of a number of audio files to come. The respectful, almost regal deep blue backdrop and the typewriter font add to an air of grandeur and history. 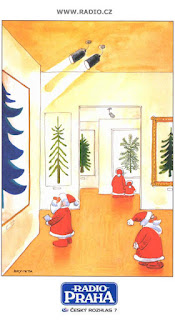 If you remember the 8 track cartridge then you are older than me! This format was popular in the 1960s and 1970s and there are quite a few collectors out there, so inevitably there are a number of websites too, including an 8 Track Cartridges web ring, linking many of the groups together. Some nice overviews of the music released on cartridges and the background at:
http://homepage.ntlworld.com/hamidk/8-tracks.htm “8-track tapes originated in America in the 1960s. They were primarily designed for playing pre-recorded music in cars and trucks, but home and portable players were made, too. There were even some recordable 8-track decks. 8-track was a huge success in the U.S. until the now familiar audio cassette took over in the later half of the '70s. Outside the American "car culture", 8-tracks were less popular. They were made and sold in Britain for several years. In most other countries they never appeared at all.” And when your old 8 cartridges break, Jeremy Larsen will show you how to fix them, at: http://www.geocities.com/Paris/4831/8tracks.html

The World QSL Book is a comprehensive resource and reference book on CD for any hobbyist who is interested in acquiring a verification of reception of almost any HF station, whether broadcast, utility, amateur radio, or unlicensed pirate or clandestine! This 528-page eBook covers every aspect of collecting QSL cards and other acknowledgments from stations heard in the HF spectrum. This self-loading, easy-to-use reference begins with a comprehensive tutorial on how to QSL (verify) radio stations followed by address sections for broadcaster and utility stations. It is loaded with station addresses, Internet websites, and e-mail addresses. Coverage includes shortwave broadcasters (including clandestine and pirate stations); HF utility stations (civilian and military); and amateur radio QSL bureaus worldwide. It is the first comprehensive publication of its kind devoted to QSLing radio stations in the HF radio spectrum. The World QSL Book is published in Adobe Acrobat (PDF) electronic format and is fully searchable/printable. Teak Publishing. http://www.universal-radio.com/catalog/cd/1183.html

If you want to send a Christmas e-Card from ABC Australia, more specifically linking to the Aboriginal radio network, go to
http://www.abc.net.au/message/contact/ecards/christmas.htm It is part of Message Stick which is an ABC indigenous radio station.
Other Christmas e cards from ABC can be seen and sent at: http://www.abc.net.au/alicesprings/ecards/

If it is a more traditional Christmas card, albeit by electronic means, that you are looking for try some of the following web addresses:
BBC Radio Leicester offer animated cards at: http://www.bbc.co.uk/leicester/ecards/xmas_postcard.shtml
Their colleagues at BBC Kent have a wider range (Leeds Castle in the snow is my favourite) at: http://www.bbc.co.uk/kent/christmas/e_cards.shtml

Finally, for an all singing and all dancing (I kid you not) range of Christmas cards, the travel bookmark website takes the honours. Throughout the year they produce some tasteful travel postcards of Lake Garda scenes at: www.travelbookmark.com/cards/gardalake.shtml but come this time of year and festive fever seems to won over good taste, at: http://www.travelbookmark.com/cards/xmas.shtml
- December 17, 2007 No comments: