We have the regular selection of entertaining and off beat websites for you this month with some quality You Tube channels, a language lesson, innovative free radio and some staggering transatlantic FM DX.

Down the tubes
Back in its early years Channel 4 aired a television series entitled “The secret life of machines”. A gentleman by the name of Craig Tube has generously now uploaded these programmes to his YouTube website at http://www.youtube.com/user/CraigTube. The programme on how radio works was of great interest to me, although reminiscent of those 1970s BBC 2 Open University programmes: http://www.youtube.com/watch?v=3ehVVpY6XE4


Late summer treats
A few things now to take on any late summer holiday you are planning: CDs, books and a language course. 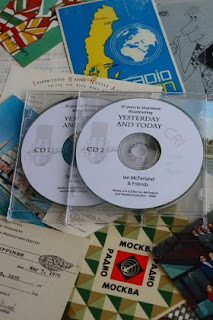 Colin Newell, Ian McFarland, Bob Zanotti, Kim Elliot , John Figliozzi et al have released their long awaited CD Series 3, Yesterday and Today - A 20 year retrospective of SW Broadcasting - the past, present and future of International broadcasting. At a running time of about 155 minutes, the 2 CD set features a little of the old and a lot of the new - and a bright look into the future of radio - starring some shortwave gurus.
This is available to buy at $17 via http://www.dxer.ca/ My own copy came from Canada in about a week and is excellent value for money. “In the year 1979, the average shortwave listener would not have given a second thought to the longevity of radio - It had always been readily available. TV had been the competing medium for over 30 years - and in light of its success, and the inability of television to replace radio, the accepted theory at the time would have been: World band radio is here to stay.”

Jerome Berg’s hefty tomes on international broadcasting do not come cheap ($65) but would make an excellent gift. His “Broadcasting on the shortwaves from 1945 to today” and its sister companion “Listening on the shortwaves from 1945 to today” are 500 pages, year by year of stations, technologies and memories.
Published by McFarland, http://www.mcfarlandpub.com/ it follows on from his first, 1990’s volume of “On the shortwaves 1923-1945”. His related, successful and oft updated website is also a treasure trove for all those interested in radio then and now: http://www.ontheshortwaves.com/
KBS World Radio, the overseas broadcasting branch of the Korean Broadcasting System, has published a 244-page conversation textbook and CD for people who want to study the Korean language.
“Let’s Learn Korean,” is a beginner’s guide in ten different languages including English, comprised of 20 lessons that introduce different situations in airports, hotels, restaurants, hospitals, department stores and popular tourist sites in the country. The contents of the book and the audio recordings are also available at the KBS World Radio website http://world.kbs.co.kr/ specifically at: http://world.kbs.co.kr/learn_korean2/
I spent a happy hour myself practicing my pronunciation and dipping in and out of the lessons.

Radio loose ends
A useful and very simply designed website which lists broadcasters by language is at:
http://radiolanguages.tk/ You choose the language you want information on, then are led to three options of viewing a spreadsheet b7y frequency order, time order or station order. It appears to be updated very regularly so might well be worth bookmarking. Maintained by an individual going by the mysterious name of Sintsixtus. Incidentally the tk in the internet address is for Tokelau, a Pacific island.

A highly entertaining radio blog can be read at:
http://blog.wfmu.org/freeform/2006/03/adventures_in_a_1.html This is called WFMU Beware of the Blog- a radio station that bites back. WFMU FM is a listener-supported, non-commercial radio station broadcasting at 91.1 MHz FM in Jersey City, New Jersey, right across the Hudson from lower Manhattan. It is currently the longest running free freeform radio station in the United States.

The station website itself is at http://wfmu.org/ They play a real mix of oddities and thought provoking music, and, for me, this is what radio should be all about. The website offers a photo of the day, and if you click on it you get a sound bite of the day. WFMU is innovative and worth an evening of your internet time.

Paul Logan, a well known FM DXer based in Northern Ireland, has been having another good summer of Sporadic E openings. His greatest catch this year was hearing 90.7 FM WVAS in Montgomery Alabama at an astounding distance of 4011 miles (6456 km). WVAS is an 80 kw Jazz and National Public Radio station celebrating its silver jubilee. It beats his previous record braking catch of 2003 by some way.
For us mere mortals our best chance of hearing jazz or any type of music from Alabama is online. WVAS is at: http://www.wvasfm.org/ Like any self respecting radio station these days it also has a web presence in Twitter and Facebook: http://www.facebook.com/ www.twitter.com/wvas

Paul Logan himself is not short of websites. Try these three Paul’s Listening Homepage: http://geocities.com/yogi540/ has details of his radio and TV DXing activities, nicely illustrated by mp3 files, RDS and tv screen shots. More photos are at his Flickr account, which includes QSL cards, radio photos and RDS grabs: http://www.flickr.com/photos/radiofotos/ Paul also has a YouTube channel, where he is known as Yogi 540, containing recordings of some of his catches. This includes a Mexican medium wave station, also local band scans and some experimenting: http://www.youtube.com/user/yogi540