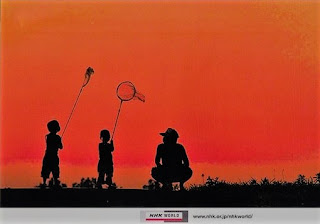 Chrissy Brand hears how Ukrainian state radio and television is being transformed. She reports on radio just over the North Korean border and looks at some of the summer schedules.

Behind the Lines and Summer Schedules

There is such a variety of news, information and music to hear when you tune around the medium, long and short wave bands. In just a couple of short listening sessions, I experienced NHK World Japan explain how the Japanese are helping to build Indonesia's first subway in the capital Jakarta. Next was Radio France International, who reported on the strikes that were bringing the country to a standstill. I then heard some nice Hindustani classical music on All India Radio, the latest Korean pop on KBS World and some vintage Czech ballads on Radio Prague.
NHK World (Nippon Hōsō Kyōkai, Japan Broadcasting Corporation) has had a slight name change to now become Radio Japan of the NHK World. This is to ensure its audiences associate all NHK branding with the country of Japan, host of the 2020 Tokyo Olympic and Paralympic Games. NHK stated that this, "will give a Japanese perspective in trustworthy news coverage and programming. Closer coordination with NHK's domestic services will supply even more content to satisfy the interests of the global audience."
You can hear Japan's English to Europe and Africa from 0500 to 0530 UTC on 5975, 9860 and 11970kHz. There is an 1100 UTC broadcast to South East Asia on 11695kHz from a transmitter in Singapore and a 1400 UTC transmission to the Middle East and Asia on 11705 and 11935kHz. The station has always featured some stunning photography on its QSL cards. Submit your reception reports and programme feedback online.

As well as analogue, linear radio, I also listen online, in order to keep up with news and programmes from broadcasters whose English services have left short wave. My first port of call is usually the World Radio Network website, which has three streams of English (for Europe, Africa and Asia and North America) airing number of famous broadcasters. One example being Deutsche Welle, who devoted a entire programme to a correspondent in Londonderry looking at the history of the troubles and explaining the 20th anniversary of the peace settlement and current day situation in a well balanced way. Turning to Polish Radio, the External Service's English programme I heard reviewed a translation of Hans Christian Andersen's fairy tales into Polish.

Ukrainian Radio
I attended a presentation given by Zurab Alasania (CEO, Public Broadcaster of Ukraine) at the Radiodays Europe conference in March. He spoke on how the state media is being transformed from a propaganda tool into a public broadcasting company. It is an ongoing struggle, despite support from the EU, Deutsche Welle and the Swedish Radio Media Development Office. The changes affected over 7,000 employees and more than 20 regional studios. It also led to the creation of a multimedia newsroom and an academy of public broadcasting (Fig. 3).
In a frank and, at times, despairing talk, Zurab stated that one step taken was to remove the toxic (by which he meant propaganda laden) programmes; an operation which meant that half of the total programme output was ditched. Consequently, it is now impossible to produce enough high quality content 24 hours a day for the 31 channels that require it.
Much of the equipment in use before the transformation was over 25 years old and in a state of disrepair, and many  of the buildings were older still. The rocky road of change has led to conflict with the Ukrainian government. This was partially caused by many politicians who, realising that they could not benefit by being given air time on the new public broadcasting company, refused to cooperate.
Zurab described a lack of trust throughout Ukraine amongst everyone due to the ongoing war. He hopes that things will improve but there isn't enough money to produce enough quality programming for the audiences. He sadly concluded that, "the audiences almost hate us."
Radio Ukraine International can be heard these days on medium wave in Russian on 1278 and 1431kHz and in English on short wave 11580kHz. The station still issues QSL cards (Fig. 4). 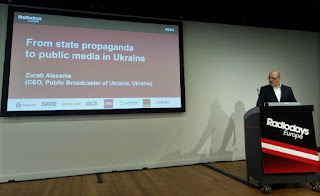 North Korea
Mark Fahey in Sydney, Australia, is a treasured radio contact of mine. He describes himself as a new media creator and is fascinated by all things North Korean. He often travels to the DPRK (to give North Korea its official acronym) and has insight into many aspects of life there, including culture and radio. In April, he contacted me while he was skirting the North Korean border, taking photos across the river of the Sinuiju 873kHz transmitter tower and North Korean fishermen (Figs. 5 and 6). He got close to the relatively small fences that divide the border, north of Dandong.
Mark shared with me a fascinating audio recording of 873kHz, made on Easter Sunday. It's also interesting for the fact that this frequency carries the full 18 hours of KCBS domestic programming; for the remaining six hours of the day it carries Pyongyang Pangsong. That is the Korean semi-domestic service, intended for the southern provinces, or what we call South Korea. Usually, these two networks operate on separate frequencies and the KCBS outlets go off for six hours during the night but not on 873kHz.
The audio was over modulated and clipped, exactly as received and the usual quality for the North Korean domestic outlets. The switch from Pyongyang Pangsong takes place at 0500 North Korean time, with the KCBS interval signal and opening announcements. The programme content comprised some stringed classical music, a wonderful old interval signal and dramatic sounding sign on. Then some martial, triumphal music, beloved by so many state broadcasters from the BBC to the Voice of Vietnam.
Mark signed off to me at 1022 Pyongyang Time with an update that 873kHz Sinuiji (250kW) was off the air, when it should have been on. Meanwhile, on 819KHz Pyongyang (500KW) was reaching the Dandong area at local type levels.
Mark has written a book on North Korea called Behind the Curtain, the Guide to Propaganda and Media of North Korea. It will be available on iTunes as an interactive media experience with video and audio. It will be published towards the end of 2018 but you can see some tantalising previews online.

The BDXC-UK Broadcasts In English publication for the summer A18 season (until late October)is available (in print form or as a PDF. It includes details of all known international broadcasts in English on shortwave and medium wave for the current schedule period, as well as selected domestic English broadcasts on shortwave. Copies cost £3 in the UK (postage included).

Good to see a new entry on your blog