Margaret Howard took over BBC World Service's Letterbox programme from Hugh Tattersall. Here they are, looking suave and glamorous and cracking open a bottle to celebrate the programme's 10th anniversary in 1975. The theme tune was a lovely piece of Bach
.
There is  a comprehensive post about Ms Howard at Andy Walmsley's Radio jottings blog plus a 1981 episode of Letterbox to hear:
http://andywalmsley.blogspot.co.uk/2011/03/margaret-howard.html

which includes an engaging 2010 Vimeo interview carried out by Jonathan Marks http://jonathanmarks.libsyn.com/index.php?post_id=624503

Radio Havana, now and then


David Grenfell sent me some cards he received from Radio Havana Cuba in 1971. He would be happy to sell this set of four Radio Havana 10 year anniversary cards should any collectors be interested (one is illustrated above) and you can contact him at: grenfdj@btinternet.com.

Having recently enjoyed the two 2008 epic films Che, I can vouch for the accuracy of some of the cards’ cartoons of camouflaged, beret-wearing revolutionaries ;-)


From Northampton Radio User reader Howard Barnett asked if Radio Budapest is making a comeback. I fear that this is merely wishful thinking, as Hungary left shortwave and closed its English service five years ago, and as far as I am aware is sadly not making any return.

Magyar Radio in Hungary does have six channels but none in English nor any that are easy to catch in the UK. You will have to listen online in Hungarian or in the minority languages spoken in Hungary: www.radio.hu  Look for the Union flag symbol for the English translation of the Hungarian website.
However, commercial FM station Radio Q99.5 in Budapest does air an hour of English each week. “Talking Music with the English Guys” can be heard online and is on Thursday evenings and Saturday afternoons: www.radioq.hu   Click on Online Adas (Listen live) in the top right hand corner of the screen. 21.00 (CET) on Thursdays and 15.00 (CET) Saturdays. On Facebook at: https://www.facebook.com/pages/Talking-Music-with-The-English-Guys/204220956312057
- July 20, 2012 No comments:

Radio Free Asia's 45th QSL card starts a new series of cards that recognise the International Broadcasting Bureau (IBB) relay sites used for RFA broadcasts. The first is from IBB’s Tinian relay site and confirms all valid RFA reception reports from April to July 2012.
However they are also issuing this Panda with bearskin hat QSL for a special Summer Olympics QSL card for reports covering July and August.
If you hear Radio Free Asia in one of their nine Asian languages (Mandarin, Tibetan, Burmese, Vietnamese, Korean, Laotian, Khmer, Cantonese, and Uyghur) you can email the station at contact@rfa.org
The website's at : www.rfa.org/english/ or you can even go old school and write to them at Radio Free Asia, 2025 M St NW, Washington, DC 20036, USA.
- July 16, 2012 No comments:


The BBC World Service may have left Bush House for Broadcasting House but it has left an awful lot of kit behind. This is all up for auction, and is an amazing array of broadcasting equipment and ephemera, all starting at very low prices.

Phase 1 of the auction is open now and has televisions, studio desks and chairs, video and sound recording equipment, tape decks, microphones, office furniture, prints, photos and paintings, even old studio clocks – some of these would make a great momento for the BBC World Service fan and a useful addition for many smaller radio stations or technical buffs looking for bargains and a piece of history.

Some of the 1,500 Phase 1 items are expected to sell for over £10,000 but the minimum bid for each lot is just £10. Phase 2 of the auction is in Sept which includes complete studios. See you at the virtual auction, I have bid on a few things already...

Visit the online auction at http://www2.ppauctions.com/auction.php?id=67 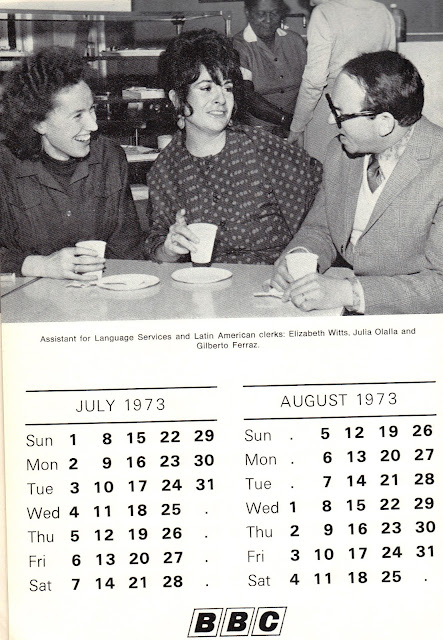 The final BBC broadcast from Bush House was today's 1100 GMT World News bulletin. Now the last of the stragglers at Bush join their BBC World Service colleagues over at the new extension to Broadcasting House, a couple of miles across London.

Thank you Bush House for your hospitality and for being a wonderful building that housed and aired millions of memories and momentous events for seven decades from 1940 to 2012.

This photo is in the BBC Bush House canteen in 1972 where three members of staff were photographed for the 1973 External Services Audience Research calendar.
"Assistant for Language Services and Latin American clerks: Elizabeth Witts, Julia Olalla and Gilberto Ferraz".

1973 shares the same dates and days as 2012 (from March, 2012 being a leap year) so you can use this as a desktop wallpaper calendar for July and August - talk about reusing, 39 years later! 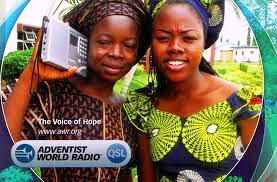 
A station showing no signs of deserting shortwave is Adventist World Radio who are running their annual Wavescan DX contest throughout July. Entitled “Listen to AWR” you need to tune into as many different AWR shortwave locations as possible.


Return postage in the form of currency notes in any international currency, or mint postage stamps, or IRC coupons would be welcome as would be a self-addressed return A5 envelope. Prizes are a Jerry Berg radio history book and a World Radio TV Handbook 2013.

In addition, there will be AWR souvenirs and radio curios for many participants. All AWR reception reports will be verified with a special AWR QSL card.  The address is Listen to AWR DX Contest, Box 29235, Indianapolis, Indiana 46229, USA.
- July 06, 2012 1 comment:

That strange summer phenomenon of Sporadic E has brightened up a wet summer in the UK so far. There have been some excellent Sporadic E FM catches from hundreds of miles away and on a regular basis too. See the British DX Club's Communication and the Beyond the Horizon column which had 8 pages of SpE logs this month. www.bdxc.org.uk 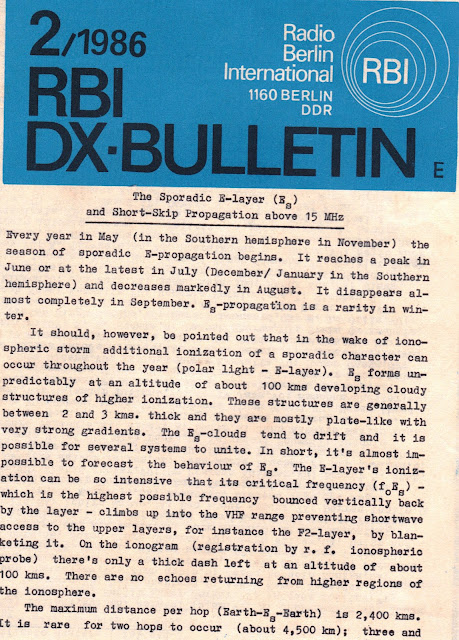 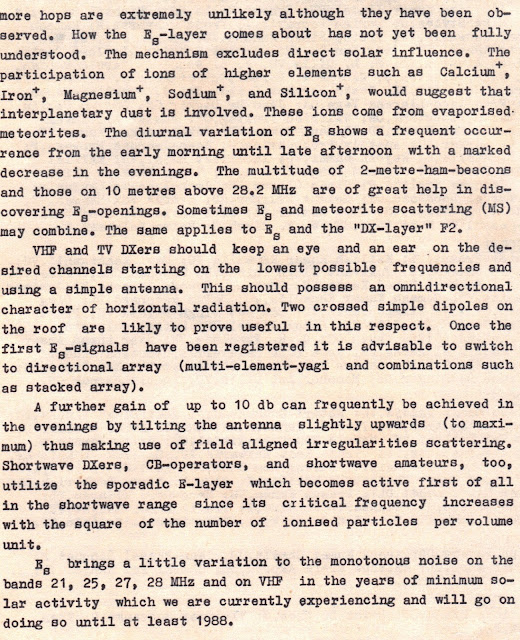