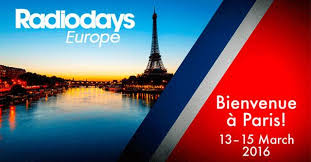 I may have some interesting radio-related trips in the pipeline. The first of these is the annual Radio Days Europe Trade Fair which this year is being held in Paris this year, from 13-15 March 2016. I'm catching the train to Paris at the weekend and can't wait!


The theme is “Vive La Radio! Creating the future”. With 55 sessions, 120 speakers and 60 exhibitors it’s a major event. At the time of writing I plan to attend and report back for Radio User readers. The content is diverse covering the academic and the mainstream, podcasting and social media, technical, talent management and new programme formats. For instance KIIS 106.5 presenters Kyle and Jackie talk about their move across Sydney from 2Day FM to front a new breakfast show; then there’s Professor Emma Rodero and Martin de Munnik exploring the impact of audio on the brain, what can be learnt from how voices and music are used and what the future’s more intense commercials and radio shows may look like.


About a month later the International Radio Fair (IRF) takes places in Milan, from 7-10 April. This used to occur in the summer in Switzerland but has now moved a little further south as well as popping up earlier in the calendar. It bills itself as “the leading platform for showcasing and debating the business of music radio content; the world’s most consumed medium” joining up with Radio City Milan and to present Europe’s largest public on-air radio festival at the Piazza Gae Aulenti. There will be over 20 international plus 50 Italian radio stations who will broadcast radio shows live-on-air to millions of their listeners back in their home cities. The IRF is truly moving beyond Europe as it is planning similar events in Nashville, Dubai and Shanghai.

I have not attended but I always listen online to some of the content, which you may choose to do too. If you can’t head for Milan, as I probably can't, at least head for www.internationalradiofest.com