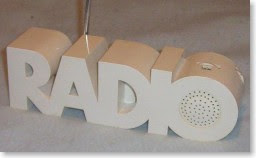 This time we have a selection of great You Tube DX and radio videos, a look at some internet radio portals (via a strange story) and some radio-related collecting sites.

Starting with the latter, the annual National Vintage Communications Fair is on Sunday May 11th at the Warwickshire Exhibition Centre, Fosse Way, Leamington Spa, CV31 1XN. Entrance fee is £5, and it is open from 1030 to 1600 BST. This used to be held at Birmingham’s national exhibition centre twice a year but is now an annual event. Organised by the British Vintage Wireless Society (BVWS) with more details at: http://www.bvws.org.uk/ See you there!

The Fairground Organ Preservation Society is celebrating their Golden Jubilee this year. A fascinating website and it is also part of a ‘Crank Organ’ web ring. A taster for you: “When the early enthusiasts gathered round Tom Albert’s' 98-key Marenghi in Bolton for Sunday recitals back in 1957, they must have had little idea of the impact their decision to form themselves into a Society would have on the preservation movement or of the expansion of the Society to include members from most parts of the world…” http://www.fops.org/

Finally on the vintage front, Paul Stenning’s http://www.vintage-radio.com/ is always worth a browse and he is a member of the BVWS mentioned above. The novelty transistor radios section amused me, with photos and information on dozens of radios in the shape of cartoon characters, fruit juice cartons, a space rocket and even a toilet. I’ll leave it for you to decide which radio stations deserve to be tuned in on that one!
www.vintage-radio.com/manufacturers-and-sets/novelty-trannie.html

Radio User reader Len recommends the following website, which is also an old favourite of mine: http://www.live-radio.net/worldwide.shtml Its reassuring deep blue background, small print and logo has been ‘leading the way since 1997’. It has a list by country from which you can choose particular stations. Thousands of great internet radio and real radio station to choose from.

The headline at the top of the home page changes and is usually of interest. Last time I looked it was about two listeners who are suing a US radio station. This from a news story by Ann McGlynn of the Quad City Times newspaper in Davenport, Iowa: http://www.qctimes.com/.

Two listeners of KORB 93.5 FM say they were promised $30,000 for five years if they had the station logo tattooed on their forehead. DJ Ben Stone, also known as Benjamin Stomberg, made the statement on air in November 2000 as a practical joke…

KORB 93.5 FM is based in Bettendorf, Iowa. It has since re-branded to become KCQS but is better known as Star Radio playing ‘today’s best variety’: http://www.star935fm.com/

Whatever its name, it’s one of a staggering 255 radio stations in that state alone that can be accessed via the SHG Resources portal at: http://www.shgresources.com/ia/radio/


Some other useful internet radio portals and general sites can be found on page 31 of the April edition of RadioUser.

Another portal I have been using of late is that of 1 Club FM, which is a social networking site with links to 90 radio stations and different musical genres. These include blues, house, trance and nature sounds: http://my.1club.fm/ It proclaims “Sign in to 1Club FM to build a free profile, upload unlimited music, videos, photos, chat, and view the playlists of your favourite channel. We have taken Internet Radio to the next level.”

You Tube is always full of video clips with a radio bent that are guaranteed to distract you. Here are some recent ones that I have enjoyed. Starting with a number of station studio tours, we have a two minute demonstration of how a modern studio works, courtesy of breakfast presenter David Way at Delta FM: http://www.youtube.com/watch?v=ibg10q6idjub

Next is a one minute tour of Sky High radio in Cork: http://www.skyhighradio.co.uk/ at: http://www.youtube.com/watch?v=HYYwoJgt6KQ

Freakshow FM is a Dutch station with an entertaining five minute home made tour: http://www.youtube.com/watch?v=kyHxMckQRAw&feature=related and http://www.freakshow.fm/

Dutch Pirate station Cupid has a five minute tour of its facilities at: http://www.youtube.com/watch?v=lkSXbcK-GLc

With the sporadic E season about to commence in May it’s timely to recall the famous transatlantic DX catch of June 2003, when WHCF in Bangor Maine was heard in Northern Ireland. The catch, of some 2710 miles, which made the pages of many a radio publication, including this one, now has a minute of video dedicated to it. You can hear the catch for yourself illustrated with images. Brilliant! http://www.youtube.com/watch?v=ga56hsHvTCg

Equally as good is the nine minute catch that summer of CKLE. This is a French speaking station in Bathurst, New Brunswick, Canada. It was heard on 92.9 MHZ, 2506 miles away. http://www.youtube.com/watch?v=qy4Nnhet6SY&NR=1

Both of these are amongst 30 video clips of one ‘Yogi 540’, also known as Paul Logan, who also has a website at: http://www.geocities.com/yogi540/

A more modest, but still impressive, example of e-skip from last summer, is audio of Radio Istanbul heard in Cologne, Germany: http://www.youtube.com/watch?v=42NN1pREsYg&feature=related

For us mere mortals that cannot hope to catch an FM signal over 3000 miles this sporadic E season, take the short cut by going to the WHCF and CKLE station websites. WHCF is ‘Maine’s best praise and worship music’ at: http://www.whcffm.com/ CKLE is at: http://www.ckle.fm/
- April 24, 2008 No comments: