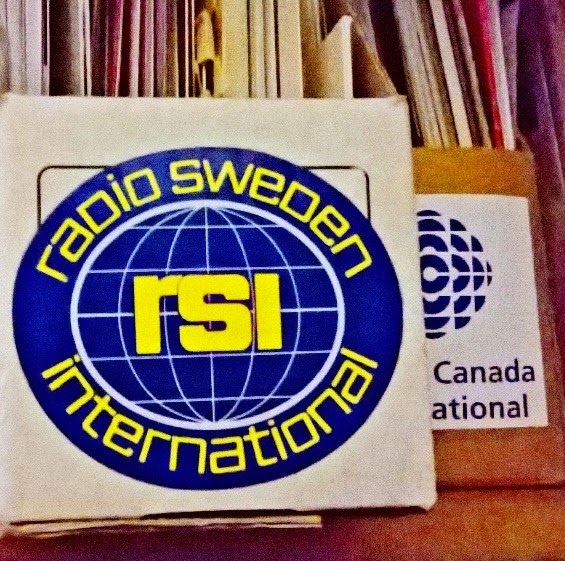 Radio Sweden celebrates 75 years on 13 December. It was that grim first December of World War II that the station took to the airwaves in English (a Swedish service started a year earlier). They were mostly heard on shortwave back then,  although the English service of the station left the airwaves a few years back, I listen to their weekday 30 minute podcast several times a week.

I am fairly sure that Radio Sweden in English with its lovely interval signal and identification was the first station I heard on shortwave back in the 1970s. Their programmes have always shown me an intelligent, liberal-minded and culturally rich country. I was hooked as I became a teenager and have not veered far from their delightful Nordic news and views of the Nordic countries ever since- they remain a favourite and are a voice of reason on what is often an otherwise propaganda-led, rather dumbed-down radio dial.

I have a smattering of QSL cards which I must photograph and put on Instagram this week, I also have happy memories of their paper schedules, and of proudly wearing a “Keep In Touch - Radio Sweden” T-shirt in dark blue with that familiar Radio Sweden font in yellow, in the early 1980s. I wonder if they still produce such clothing items- a tote bag is available?

The 2014 Swedish General Election coverage was fabulous, as was the Green Party forming the collation government. I hope the 22 March 2015 snap election produces similar successes.

It would be nice to hear relays of Radio Sweden programmes return to shortwave on Global 24 Radio. I hope they sign up, as many other stalwart shortwave stations already have re-established a shortwave voice this way since October 2014.

Happy 75th anniversary Radio Sweden! Have a listen to them, both their daily programmes and their archive material.