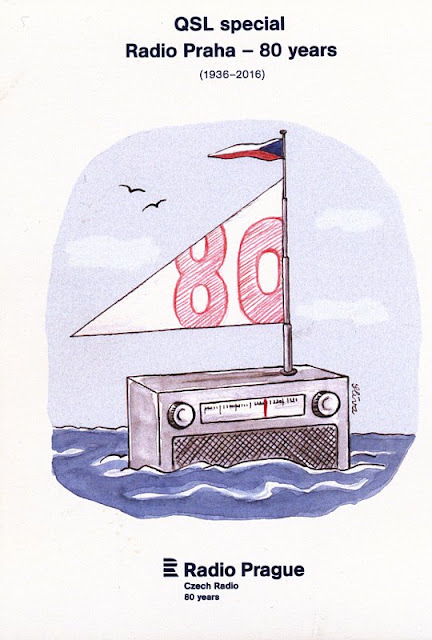 BDXC UK report that "The schedule at shortwaveservice.com gives 9885 for Czech and 9985 for English I am not sure which is correct – try both".


Radio Prague also held an essay competition as to what Radio Prague would be like in 80 years time? The winning entry is here. Congrats to Anna Kochergina from Russia. It’s far more detailed and imaginative than my own effort, I didn’t get a place in the final this time around, and what I write wasn’t very original. I bashed it out in too much of a hurry really, as I distracted by  RadioUser and BDXC UK commitments, EDXC 2016 organisation and the day job, but here it is anyway.

"Hello and welcome to Radio Prague's English language videocast for 30th August 2096. You can find us by asking for Radio Praha on your virtual reality implant or on your smart screen. Watch us live every day at 1800 Universal Time, or at your leisure from our list of past broadcasts. As always our hour long transmission begins with world news. Today's programmes also include My Czechia Republica which features an air-powered car designer originally from Cambodia, an item on the Moravian wine festival, previews of the Prague summer jazz concerts and listeners' comments.

But first the news headlines: The president of the United Countries of Europe, Zelma Lassnig has confirmed that she will be standing down at the end of her term in 2097. Czech Green Party leader Alena Železný has announced her intention to stand.

The Czech cruise liner Boleslava III arrived in the port of Genoa with 2,000 Pacific Islanders. This is one of the final boat loads of climate change refugees to arrive in Europe. The 2,000 will join other Pacific islanders in the community of Nový Ráj, just outside of Brno. There are now half a million Pacific islanders that have established themselves and integrated across Europe since their atolls and homes started to become inhabitable due to the rising sea levels some half a century ago.

The Czech exploration team to Mars headed by Jana Balek is due to take off from Woomera in South Australia in three days' time. You can join Jana and her team in an exclusive Q&A session run by Radio Prague on the air at this time tomorrow night. Sign up on our vlogcast page with your contact details and your questions and we will select people to take part...

Carp is back on the menu at a top Czech restaurant and it's causing concern. Carp, like all fish and meat, had been banned on cruelty grounds throughout Europe since the mid 2060s but the recent explosion in heritage dining experiences is challenging this. Helene Velinger reports...

...The weather for the Czech capital today - and it's been another hot one, with this summer looking like it will be the hottest year on record in the country. We may possibly break last year's record high of 41C come Saturday. A reminder that the water rationing collection times for Malá Strana and Staré Město return to their regular four hour evening pattern, from 8pm to midnight, from tomorrow.


...Join us tomorrow when we are at the Prague zoo, where they welcomed its most recent addition yesterday, a Sumatran orangutan, born in captivity. We'll also be previewing the new soccer season and asking if European Champions Varnsdorf can also retain their domestic league title. The 400 million Euros that they paid in the summer for India's World Cup winning defender Jag Naleem will certainly aid their chances.

...Listeners' letters this time include Anna Kesten from Ohio, USA who complements us on the live coverage of the European Literature festival last month. Anna says she has been using an app called Czechtech to translate the wining entrants' works straight into English on her audio player. Tomas Collingwood from New Zealand contacted us to say how much he enjoyed the programme aired from the retro shortwave transmitter based in Germany and being run by the European Broadcasting Union. He said it was just like back in the day of his great grandparents who used to listen on shortwave last century. It will certainly get him a special QSL card - this years' series feature great Czech architecture of the mid 21st century.

...And finally, a reminder that this year is Radio Prague's 160th anniversary. As part of celebrations we would like to invite our audience to take part in a competition. Let us know what you think Radio Prague will be like in another 160 years, in the year 2256! Airbox your entries to us by the end of the month to be in with a chance to win one of our prizes. This is Khrista Willoughby signing off from all of us in Studio 8 until the same time tomorrow ..." 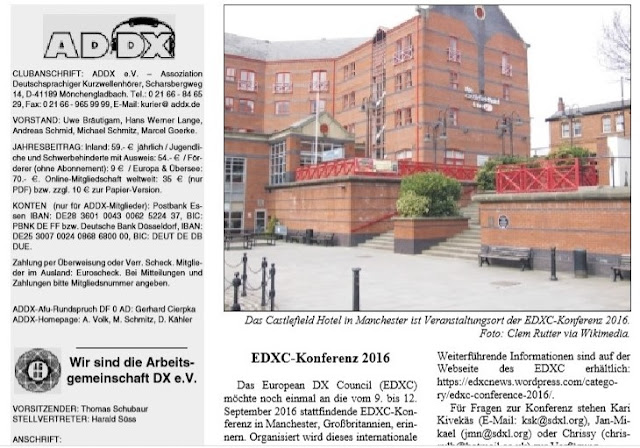 Firstly, apologies for the lack of posts here of late. I've been uber busy, with the day job, my RadioUser columns, editing BDXC Communciation each month, plus family commitments, a relationship and a busy social life, not to mention all of my campaigning activities and a holiday in Nice, one in Tywyn and other summer travels too. I'm not complaining though, far from it- I can only function if I'm busy.

Anyway, another reason for the tumbleweed blowing across this blog is my preparation for the EDXC Conference, which has distracted me from posting here. The DX publicity machine is doing its job though, with the Radio-Kurier journal in Germany the latest I've seen to mention EDXC 2016 (photo above).

The latest programme and details of how to join us at what should be a very exciting conference are at the EDXC site, with this link taking you to all the conference related posts.