This month we turn the spotlight on how to collect different 30 QSL cards a year from just three stations, monitor the bands for current activity and, with a new president soon to be sworn in, tune into the Voice of America.

Stations with a good QSL policy
Radio Romania International has recently installed new shortwave transmitters. The station is also one of the few to still issue a different QSL card each month. There is a theme each year, with that of 2008 being flora and fauna. They also accept reception reports via an online form at their website: www.rri.ro/

A Romanian culinary Christmas tradition is to serve stuffed cabbage on Christmas Eve, and again the next day for lunch, because it tastes even better on the second day after cooking! This is the kind of information you can glean from becoming a regular listener to programmes such as “Traveller’s Guide”. An item recently toured Transylvanian spas. The spas in Transylvania are visited by an increasing number of tourists every year and sometimes as a winter holiday. On Thursdays is “Listeners Letterbox” whilst music lovers can listen to Romanian traditional music in “The Skylark”. 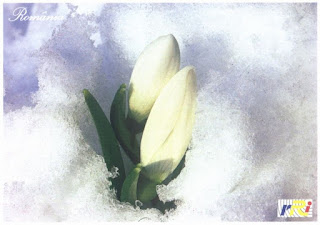 Radio Slovakia International has undergone another turbulent year, losing some of its freelance presenters such as Pete Miller due to financial cuts. However, the station still reached and celebrated its 15th anniversary in 2008. News and views can still be heard from Bratislava and, like Radio Romania, a range of QSL cards are issued monthly.

I have on many occasions mentioned Slovakia’s neighbour Radio Prague, who also issue a good range of QSL cards, usually in a series of eight per annum. Czech technology, athletes, inventors, spas and cities have all featured over the past decade. Their regular sports programmes are a good listen. Ian Willoughby keeps you up to date with winter sports such as skiing. A current darling of the slopes is skier Šárka Záhrobská who recently won the first World Cup slalom event of her career; and reigning World Cup winner Lukáš Bauer is another name to listen out for. Mailbox is always a good listen, and recently carried a fascinating feature on Czech paratroopers Jozef Gabčík and Jan Kubiš and the presence of Czechoslovak troops in exile in Leamington Spa in World War II.

Whether you collect QSL cards or not, we should all contact the shortwave stations we listen to on a regular basis, to say hello and to let them know we are still listening and enjoying their output. Write in too if you are not enjoying some of their programmes. A listener’s letter can have a big impact and programmes can be changed accordingly. A few lines by post or by email can make all the difference. Make it one of your New Year resolutions!

Scott Caldwell writes that he has experienced variable conditions on shortwave, resulting in a mixed set of stations received. He tried a combination of antennae and receivers to combat this, but was unable to decide which set up worked best. Scott also struggled with medium wave reception, failing to pick up Northsound 2 from Aberdeen, 260 miles away. Likewise he has no luck with any Transatlantic signals, but hopes his luck will change as winter sets in. On the positives Scott reports how he was able to listen at many different times of the day and comments that working nights does have a positive impact on his radio work.

Scott considers the golden age of shortwave to be the 1980s when he was growing up, citing the numerous political and religious broadcasters dominating the bands then. It’s a moot point and I would contend that most DXers’ definition of a golden age is those early years when they first get into the hobby. The conditions and prevalent stations at that time are set as a marker in the memory as a reference point which future stations and conditions are compared against, often unfavourably.

Mid autumn, especially around Radio St Helena Day, did seem to coincide with poor shortwave conditions, although some British DX Club members pulled Radio St Helena in quite clearly on an outdoor DXpedition to Creech Hill on the Isle of Purbeck.

Hopefully the bands be in a more favourable situation by the time you read this. Either way the early darkness does offer exciting possibilities on both the tropical bands and on medium wave. For example, Lindsey Branigan in Brighton has suggested these stations as easy and enjoyable medium wave catches from Europe. 747 KHz is Radio 5 from Flevoland in the Netherlands, in Dutch and often with religious music, so quite festive at this time of year. 1314 and 1503 KHz are home to Radio Nacional 5 from Spain, sometimes with English pop music; 1323 KHz is the Voice of Russia in various languages; 1422 KHz is Deutschlandfunk from Germany; and 1476 is ORF in Vienna, which broadcasts both ORF 1 in German and Voice of Afrika, also from Vienna, in German on weekend evenings.

For some transatlantic medium wave in the hours of darkness, listen out for some of the following, which have all been logged in November by members of the British DX Club: 1130 KHz is WBBR in New York City; 1390 KHz is WEGP Presque Isle in Maine; 1510 KHz 2200 is WWZN Boston in Maine, including Red Sox baseball and sometimes Brother Stair as well. On 1700 KHz we have KVNS from Brownsville in Texas. Do report your findings back to me.

Shortwave selection box
English and Spanish from Austria ORF (Österreichischer Rundfunk) are set to close, so you will have to make do with their German programmes, which are excellent in themselves, and the classical music is always worth listening to. There’s usually a strong signal on both 6155 and 13730 KHz.

The Voice of America (VOA) will doubtless be covering the first few months of the Barack Obama presidency with close scrutiny. Although the VOA maintains independence, it is government funded. It started I World War II and is still one of the foremost broadcasters, speaking to the world in 45 languages. It estimates its current listening audience to be 134,000 million people.

It also prides itself on reliable sources for news stories: “VOA news and programming must be rigorously sourced and verified. VOA normally requires a minimum of two independent (non-VOA) sources before any newswriter, background writer, political affairs writer, correspondent, or stringer may broadcast information as fact in any language. The only exceptions to the double-source requirement are facts directly confirmed by a VOA journalist, or significant news drawn from an official announcement of a nation or an organization. In those rare instances when a secondary source offers exclusive significant news (e.g., a verified news agency exclusive interview with a chief of state or prominent newsmaker), this story is attributed to the originating agency by name.”

Alongside regular news bulletins, current popular programmes include Border Crossings, which is a music request show hosted by Larry Loddon. It is on air daily and you can email a request, of whatever genre of music, to: bordercrossings@voa.gov. African Beat is another music programme that I enjoy. Host David Vandy showcases the best of modern African music, “including the latest dance tunes from hot clubs around the continent”. Tune in on 9825, 15195 and 15445 kHz.

The American Special English programmes can also be entertaining. They are read at slow speed for learners of English, but cover diverse subject matter. For instance a Friday show called American Mosaic can cover anything from vegetarianism in India to famous Americans. A recent programme covered the life of VOA’s research scientist and broadcasting leader Henry Loomis. He was VOA director between 1958 and 1965 and set up the Special English department. He resigned in 1965 due to being at odds with government policy over the Vietnam war. 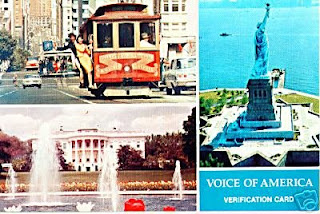