Best of British: BBC and Wimbledon 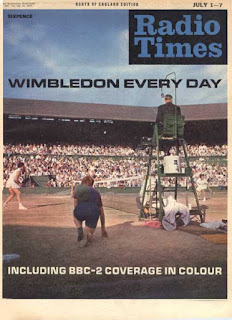 It’s that time of year again, when the combination of two of the best things about Britain come together: the BBC and Wimbledon.

Yes, Wimbledon fortnight is upon us, (22 June to 5 July) and for those unable to get to London SW19 we can rely on the Beeb to keep us informed. As well as television coverage of several live games at a time, backed up by excellent comments and analysis from former tennis champs and rabble rousers John McEnroe, Boris Becker and Tracy Austin.These three have became as important a fixture to the two weeks’ events as the endless discussions on the prices on Wimbledon’s legendary strawberries and cream. (and doubtless as important an event the discussion of the new sliding roof on Centre Court will become too, in time).

BBC radio covers it so well too, of course. BBC 5 Live Sports Extra with reports and ball by ball, and the good old BBC World Service. Their regular live updates and reporting of Wimbledon take me back to my youth in the 1970s. I well remember their 2015 UTC 15 minutes round up of the day’s play, - after the much missed quarter hour Big Ben chimes of course - with Fred Perry passing comment. Happy memories.
http://news.bbc.co.uk/sport1/hi/tennis/default.stm

Some excellent Radio Times’ Wimbledon covers are at: http://www.radiotimes.com/content/features/galleries/wimbledoncovers/01/

These days Wimbledon also has its own RSL for the event. Commentary, reports, podcasts, listener interaction and features on three channels in fact (87.7 FM): Radio Wimbledon, Centre Court and: Number 1 Court:
http://www.wimbledon.org/en_GB/interactive/radio/index.html