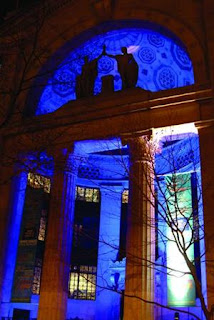 I spent two pre-Christmases working at the BBC World Service HQ at Bush House (above) on the Strand in London. These were way back in 1984 and 1985 when I worked as an assistant and then an interim manager at BBC World Information Centre and Shop.

It was a wonderful time to be there-although frantically busy from when the shop and Information Centre opened at 9.30 a.m. until it closed at 7.00 p.m. From 1st December to Christmas Eve anything that we put on the shelves was snapped up. BBC golf balls, Images of Britain and other traditional style Christmas cards, umbrellas and tea-towels.


More conventional items such as BBC records and audio cassettes, sweatshirts, pens, pencils, T-shirts and diaries sold well needless to say. Christmas 1984 was the year that Fawlty Towers was released on video (VHS and Betamax!) Videos were horrendously expensive in those days, retailing at £24.95 or £99 for the boxed set of Fawlty Towers, but they sold nonetheless.


All the frantic activity was accompanied by the piped live feed from the Bush House Studios, mostly the English service, from Richard Baker’s classical choices to John Peel, DLT to Edward Greenfield, Bob Holness to the World Radio club team, with the news read by the likes of Meryl O’Keefe and John Wing. We could also switch to any of the language services that visitors wished to hear.


Carol concerts at the local churches of St Mary Le Strand and St Clement Danes (below), the latter built in 1682 were another festive feature of December on the Strand.

There is also a two part series on the BBC WS's departure from Bush House next year, at: http://www.bbc.co.uk/programmes/p00m98kf 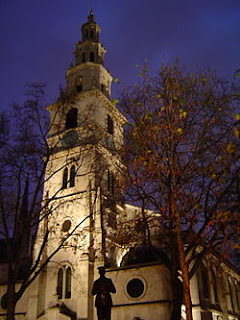