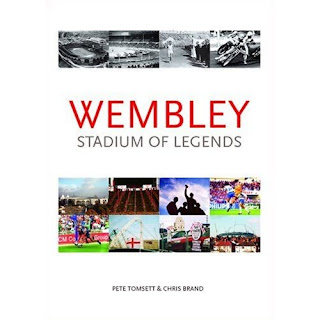 Hey, I co-wrote a book! It's out this week. See photos and read all about it at: http://www.myspace.com/wembleystadiumoflegends

Or just read the blurb here:

WILL BE IN BOOKSHOPS THE FIRST WEEK OF APRIL, 2007. Also available to buy through Amazon.co.uk and other online bookstores. Or simply google 'Tomsett Brand Wembley stadium' This book is independent of the F.A and WNSL.

"In a world so devoted to sport there is no arena that can compare with Wembley." It may sound like publicity for the new Wembley but this is a quote from the 1924 guide to the British Empire Exhibition, tempting visitors to the original stadium. And with good reason - it was, at the time, the biggest and best in the world. Football is a truly global game. Everywhere in the world people know of Wembley. Pele called it the 'Church of Football', and for decades Wembley held pride of place amongst the world's top venues - home to over 200 England internationals, including England's 1966 World Cup victory, 72 F.A. Cup Finals, Euro '96, and the 1948 Olympic Games, as well as countless major concerts, most notably Live Aid in 1985.

By the 1990s, the stadium of legends had begun to show its age, and as the new millennium began, Wembley embarked on a major transformation. A magnificent new stadium has risen from the rubble of the old. With its spectacular arch, the new building is already a dramatic addition to the London skyline. Naturally, "Wembley: Stadium Of Legends" is a book of two halves. It begins with Wembley's extraordinary history - not just the football but every aspect - combining fascinating information with remarkable archive images: tales of enigmatic entrepreneurs and entertainers, courageous athletes and odds-defying sportsmen.

Through unique photographs, the second half tells the story of the transition from old to new, from the faded grandeur of the old stadium, through its demolition, especially the heartbreaking destruction of the twin-towers, to the construction of the new building and its dramatic arch. The book finishes with a full listing of all the football matches, rugby league and world speedway finals that have ever been played at Wembley.