Radio Websites- March 2009
By Chrissy Brand, first published in Radio User, PWP Ltd http://www.pwpublishing.ltd.uk/
Recession-proof radio
With the recession it is timely to turn to the online auction sites such as eBay and the lesser known eBid: http://www.ebay.co.uk/ and http://www.ebid.co.uk/ If you are looking for radio bargains then it’s a good place to shop, especially for the more obscure items.
You might be surprised at what sells online. QSL cards from hams, broadcast stations and offshore stations often feature. There were over 90 cards on sale in the UK alone when I last checked, including a 1957 Radio Peking QSL going for £1.99 and a Radio London 1997 postcard combined with a Radio North Sea International QSL card for the same amount. Radio components can sell well too. A random box of miscellaneous unmade components was going for £10, whilst three brown bakelite radio knobs could be yours for a fiver. 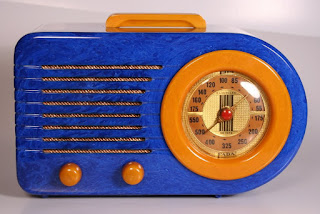 Regarding vintage radios if you look for “bakelite radio” on eBay you’ll find plenty of sets. Bush, Pye, and other British makes are usually in abundance, both working and not working. Zenith, Ferranti and Philips are other good makes that crop up often. American makes like Fada are more expensive. It depends what you want- even if it is working many only have medium wave and long wave, sometimes shortwave but rarely FM, which arrived in the 1950s. If you want a stylish objet d’art and/or a working piece then you can pick up a bargain. Of course you can also sell parts of your collection that are no longer required, and raise some cash that way.

Ham rallies are also good places to sell components and parts of home brew projects at. The Radio Society of Great Britain lists the rallies that take place usually at weekends all over the UK: http://www.rsgb.org/ and specifically at their rallies and events page: http://www.rsgb.org/news/rallies.php

For buying and selling regular modern radios then the classified and advertisers in Radio User are the best starting point.
Escape Pod
Are you feeling struck low by the credit crunch? There were of course times of hardship in the 1930s. Wireless offered a temporary escape back then, and you might enjoy the website on Radio Orchestras of the 1930s at: http://www.mastersofmelody.co.uk/

This website is masterminded by Brian Reynolds who details the various radio orchestras up to the 1960s. He has even written a book on the subject called “Music while you work- An era in Broadcasting.” Brian introduces his website as “an antidote to the rock and pop scene which has virtually removed melodic music from the airwaves. The light orchestras and dance bands of yesteryear are missed by many people. As an amateur musician I have composed a number of light pieces which used to be broadcast by orchestras and military bands and possess a substantial collection of vintage music broadcasts.”

Argentina has had economic woes on and off for many decades. Join the locals and escape for a while by dipping into Argentinean radio. A tango or two, a glass of Argentinean white wine and financial woes can be put to one side, for a while at least.

Lyngsat is another leading portal that lists all satellite radio stations. A good list of argentine radio is accessed via their South America page: http://www.lyngsat-address.com/radio/South-America.html Radio Station World is always reliable as a starting point: http://radiostationworld.com/ Radio Estereo 2000 plays tangos at: http://www.estereo2000.com.ar/

Pick of the podcasts
The American website Radio Time contains a good range of links to interesting global radio programmes that you can hear for free: http://radiotime.com/
I have recently enjoyed the rather zany, if conservative, Phil Hendrie show from Springfield Massachusetts via: http://radiotime.com/program/p_142506/Phil_Hendrie_Show.aspx and http://www.philhendrieshow.com/ This is a syndicated comedy show whose website which has podcasts, archives, one minute clips and more.

A million miles away, but through the same website, Radio Pulsar in Burkino Faso plays an enchanting mix of chants, hip-hop and local music. The station has its own website at: http://www.monpulsar.com/
Finally
Radio Time also hosts and links to the now internet–only programmes of Radio Vilnius in Lithuania (see also this month’s Broadcast Matters), at: https://radiotime.com/program/p_1984/Radio_Vilnius.aspx
The Radio Vilnius site itself is at: http://www.lrt.lt/ in Lithuanian, but you can click on English at top of the home page. For podcasts and downloads of programmes go to: http://www.lrt.lt/english/static.php?strid=170282&
“This English radio broadcast is popular with the staff of foreign embassies and tourists seeking information on the latest developments in Lithuania. But most of the listeners live abroad. News from Lithuania often gives them the first idea about our country and is an encouragement to know it even better. Translated and presented by Vladas Dobilas, Violeta Karpavičienė, Diana Kukainytė.”

The latter website, the Oldies project, plays old music with a twist and includes a Big L Fab 40 from 43 years ago each Wednesday between 1800 and 2200 UTC and Sundays 1100 to 1500 UTC. There is a blog with a list of what’s been played at: http://backfromawaterygrave.multiply.com/journal
- March 24, 2009