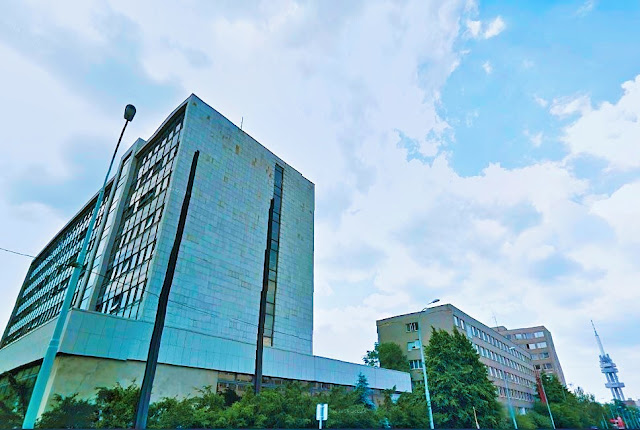 Radio Prague is still the only radio station I know of that issue QSL cards for reception of its internet broadcasts. 2016’s series will feature Czech religious monuments. Curiously, or coincidently, the only numbers stations/spy station known to ever issue a QSL card (and therefore admit it existed-doh!) was also Czech, or rather Czechoslovakian- OLX. Run by the Úřad pro zahraniční styky a informace (Office for Foreign Relations and Information). The above photo shows the building which part of it was based in – the Operations Department in the Communications Section which would have dealt with those few who managed to contact the numbers station. Quite how they were dealt with is another mystery I would like to resolve...

Radio Prague today can also be heard on medium wave and shortwave as well as online. Thanks to the British DX Club for these times and frequencies. See the website to order a copy of the BDXC’s current Broadcast in English B-15 guide (valid to end of March 2016):

English news bulletins are at 1805 and 1905 UTC on 639kHz but only with a 30kW transmitter meaning they are co-channel with CRo2 from Prague with a massive 750 kW. Oh dear.

Czech Books is one of the best programmes on the air, anywhere, in my humble opinion. This Sunday dose of intelligent literature covers fact and fiction, it can delve into real life dramas, psychological journeys, politics, espionage and corruption, travel and health. Anything and everything in fact.

Last Sunday’s (3 January 2016)  was a repeat from July 2015 which covered the trials and tribulations, the difficulties of a Palestinian-Czech family. Written by Jana Kotaishová this very moving and thought-provoking book, and programme is summed up best by this quote form the programme; “When she saw the level of prejudice and ignorance in the Czech Republic about Palestine and Palestinians she wrote a book about the reality of life for Palestinians over the last eighty years, all from the perspective of a single family. What makes the book so powerful is that members of her husband’s family tell their own stories in the first person, based on her own long interviews with them.”

The other programme on Sunday 3 January's broadcast  was the monthly Mailbag show which gave the answer to the station's last quiz of 2015: The mystery personality being tightrope walker Rudy Omankowski Jr. who was famous overseas too. In fact he tightrope walked across Cheddar Gorge in Somerset UK in 1959 and 1961. An Estonian listener won the quiz this time around.

Thanks to Radio Prague for reading my comments out too- along with thanking them for the past year of excellence I suggested that the wonderful My Prague programme should sometimes decamp to other cities and rural locales.