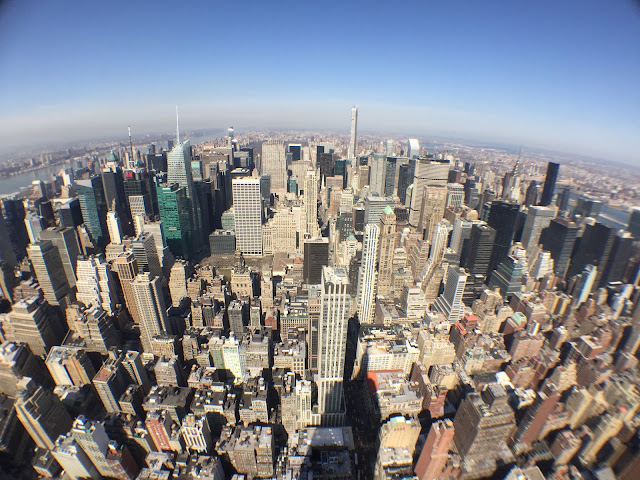 Extracts from some of my Radio User columns in 2015 (July, August & September) and January 2016, amalgamating my tales from a trip last spring to the USA.

2015 was a very good year for me radiowise. I was fortunate enough to travel overseas twice and to be able to enjoy some of the radio scene whilst there. On a trip to the USA I enjoyed the packed FM bands of New York City, Las Vegas, Buffalo and, across the 48th parallel in Canada, Toronto. Medium wave, although heavy on the sports networks and shock jocks, also threw out some more interesting catches. KTNN The Voice of the Navajo Nation on 660kHz being one such example. Another highlight was my impromptu visit to the Cedar City studios of Cherry Creek Radio, an umbrella network of Utah radio stations.

Snowstorms at Bryce Canyon made for a challenging but memorable trek although the radio in that area was less rewarding; however Utah Public Radio was a beacon of quality and included relays of the BBC World Service as well as a thought-provoking series on Utah dialects. Stations such as Eagle "rock revolution" and Planet "Southern Utah's best variety" provided a sound track to that part of our trip. The national park radio station on 1590kHz kept us updated with weather checks and tourist information. You can read other details of my radio observations in the USA in July, August and September 2015's Radio User (for DX International blog readers these are posted below).

Stateside state of radio i

In the spring I was in the USA on a family holiday. We spent a week in New York State, a couple of nights in Las Vegas and a second week exploring the canyons of Utah. I took a new radio with me, a Tecsun PL 360, which is a cheap and cheerful (but also useful) handheld receiver. I won’t go into details of the hundreds of FM stations I heard as FM is not in the remit of this column but suffice to say the band was packed in New York City and Vegas, and there was enough to choose from on FM when I was out in the wilds of Zion and Bryce Canyon.

Cedar City is a town in southern Utah where we had a one night stopover and radio wise it threw me a curveball, as the Americans might say. Not only was the FM and mw band packed with a variety of genres and styles of broadcasting, I even stumbled upon the studios of the local radio station! The small but nicely formed downtown area of Cedar City has been rejuvenated in a tasteful way, with independent vintage shops, cafes and a second hand bookstore. While looking at a Mexican restaurant’s menu I glanced to my right and saw the offices and studios of Cherry Creek Radio. In no time I was in the studio of medium wave station KSUB, watching Programme Director Tim Nesmith at the controls while Bryan Hyde presented an afternoon show on the topic of health. Programmer Andrea Wright then took us into the station office where we discussed radio and took photos. 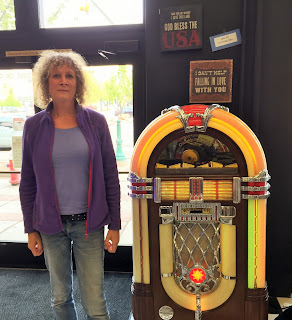 Cherry Creek Radio is an umbrella organisation which consists of several FM and medium wave stations in the Utah region (and seven other western States). However they also use some syndicated programming and I was taken aback to hear the views of infamous shock jock Rush Limbaugh - he certainly let listeners know just what he thought of Hilary Clinton in a diatribe that lasted for a whole programme. I am astonished that this conservative 64 year old’s radio show is aired on more than 600 stations across the USA. 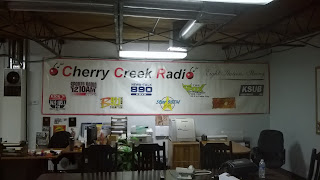 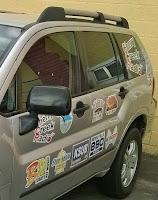 Some of the delights of Cedar City and Cherry Creek Radio

Other mw stations which I logged overnight in Cedar City included KSI on 640kHz which is “More Stimulating Talk in Southern California”, aimed at Los Angeles and Orange County. On 660kHz came KTNN the Voice of the Navajo nation in the native language and the occasional English from a DJ called JJ who was playing requests from listeners which consisted mostly of hour after hour of alternative country music. When I tuned to 1030kHz KTWO from Casper in Wyoming the programming consisted mostly of another of the country’s many conservative shock jocks, Sean Hannity, whose syndicated show is heard on some 500 USA stations.

At Niagara Falls it was very enjoyable to spend a late night session listening to lots of Canadian stations on medium wave and FM, with the cities of Hamilton and Ontario just over the border. A female sports reporter was commentating on the Florida Panther versus New Jersey Devils ice hockey match on WFAN 660kHz. There was more ice hockey with Buffalo taking on Pittsburgh on WGR radio on 550kHz, while I was delighted to hear what I read is the only station in North America on the 530kHz frequency, Brampton Ontario’s multilingual CIAO AM. Classical music, an advert for a benefit concert for Ukraine. Other languages that the station airs in includes Hungarian, Punjabi and Bosnian.

CFTR 680kHz from downtown Toronto gave me news and sport while Zoomer Radio on 740kHz from Toronto had Saturday night Grandstand and a comedy show, Just For Laughs. Other stations included WBEN in Buffalo on 930kHz with news and talk, WJJL on 1440kHz playing 1950s music for the southern (US) side of Niagara Falls. A baseball match featuring the Philadelphia Phillies was also heard on WPHT using 1210kHz. This is a 50,000-watt clear-channel station which broadcasts in an omnidirectional pattern that allows it to cover most of the eastern half of North America at night. Finally for now, there was more ice hockey from Canada on 610kHz where CKTB in St Catherine’s Ontario covered a Toronto Maple Leafs game.

As much as I love radio, when you have five days and nights in New York City, there are many other competing interests. This glorious city of bridges and skyscrapers, green spaces and bars catering to every taste, this Gotham city of rich diversity, of art and commerce, needed most of my full attention. However while there I did manage to spend some late nights and early mornings monitoring the bands for local signals. As you would expect, the FM band was crammed full of stations, offering the whole gamut of musical and talk genres, and in several languages: Spanish, Russian and Cantonese as well as English. I am sure there are many more stations which I didn’t get to hear who offer programmes for the 50% of the New York City population who don’t count English as their first language.  With so many stations coming in loud and clear throughout Manhattan (and way beyond) from the antenna on top of the Empire State Building and from neighbouring Queens, New Jersey and further afield, there was no shortage of quality radio.

On medium wave there were a fair few stations but I spent less time on this band, concentrating more on FM in the moments. However, WSNR on 620kHz is a Russian language station based in Jersey City, which at the weekends airs a Caribbean programme called One Caribbean Radio. The station is owned by Gregory Davidzon who is a Russian-American media mogul who also publishes a weekly newspaper under the name of Blackstrap Broadcasting. The fast and furious sports talk radio in Spanish on 1050kHz was WEPN, while country and western music in the big apple could be found thanks to WABC on 770kHz.  WZRC on 1380 and 1480kHz caters for the Cantonese community. Other familiar names I heard included WBBR Bloomberg on 1130kHz and CBS’ WINS on 1010kHz, which included an interesting programme all about pesticides and the types of insects that are to be avoided when you travel way out west. Religion was there of course, for example WLIB with urban gospel music and talk, and WWRV a Christian station in Spanish from Woodhaven in the borough of Queens (another Spanish Christian station was WNYH in Huntingdon). WNSW is a catholic station in English from New Jersey, while WOR “the voice of New York” was an entertaining and informative talk station on 710kHz. Musically my medium wave vote goes to WWRJ in New Jersey’s La Invasora, playing Hispanic ballads and mariachi on 1600kHz.

On the streets, it was sad to see the famous and once financially robust chain of Radio Shack struggling a while back. I thought they had gone under but it seems they have a healthy online presence and some stores still exist in the USA. Although I didn’t look too hard, I only saw a couple of Radio Shacks which had long closed down. I recall my first visits to the chain back in the late 1980s when I took a greyhound bus around the USA. On a six week road trip from Cape Cod to Key West, San Antonio to Chicago, I was grateful for the little Panasonic radio (an RF B10) I picked up in a New Orleans branch. This small and effective eight band radio served me well, especially on the long overnight legs of some journeys. I’ve fond memories of tuning to The Christian Science Monitor’s daily news and feature show from Boston, 1 Norway Street, and music programmes from some Brazilian and Mexican stations.

To finish off my short reports on what I heard on the radio dial while in USA in April, we now take another look at southern Utah. We stayed just outside Zion National Park, in Glendale, which was a great one-road town leading up to the National Park hemmed in by stunning valleys. It was a good base, especially in the evenings after a hard day’s trekking. You could wander the art galleries and eat in an excellent independent Mexican restaurant. 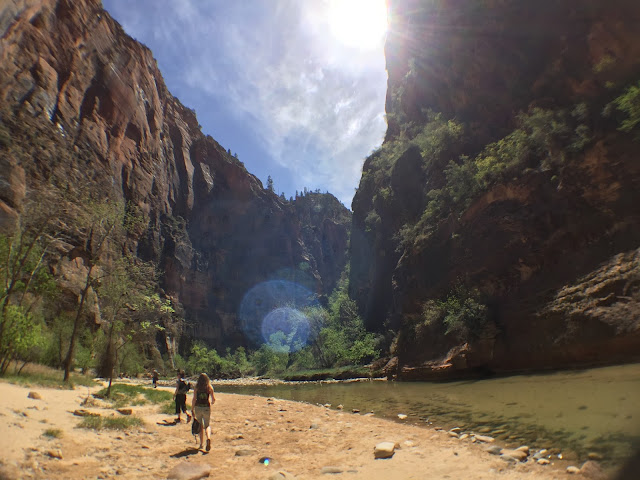 Radiowise in the short time that I was there was not much to report on medium wave or FM. It was difficult to hear much on FM in the valley we were staying in.  Utah Public Radio with classical music and informative programmes was on 90.7 MHz; KONY from St George on 99.9 MHz played plenty of country music. The public emergency service channel in Orderville Utah was on a loop on 92.9 KUOU, while 105.1 The Planet was a very ordinary FM station with a slogan of “Southern Utah’s best variety”. Medium wave did not fare much better, with KNX from Los Angeles, “Southern California’s news and talk station” on 1070kHz being a highlight. The Zion National Park Information station was on 1610kHz and KSL from Salt Lake City News Radio forewarned us of the eight to 16 inches of snow expected the next day in the mountains. But it’s always fun to tune to the local stations when you are on holiday, although there is rarely time on a road trip like we were on to dedicate yourself to serious listening. 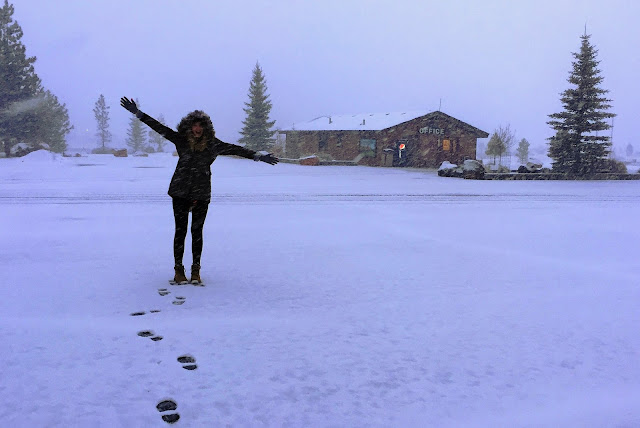